Every man is followed by a shadow which is his death—dark, featureless and mute. And for every man there is a place where his shadow is clarified and is made his reflection, where his face is mirrored in the ground. He sees his source and his destiny, and they are acceptable to him. He becomes the follower of what pursued him. What hounded his track becomes his companion.

That is the myth of my search and my return.

I have been walking in the woods and have lain down on the ground to rest. It is the middle of October and around me, all through the woods, the leaves are quietly sifting down. The newly fallen leaves make a dry comfortable bed, and I lie easy, coming to rest with myself as I seem to do nowadays only when I am in the woods.

And now a leaf, spiraling down in wild flight, lands on my shirt front at about the third button down below the collar. At first I am bemused and mystified by the coincidence—that the leaf should have been so hung, weighted and shaped, so ready to fall, so nudged loose and slanted by the breeze, as to fall where I, by the same delicacy of circumstance, happened to be lying. The event, among all its ramifying causes and considerations, and finally its mysteries, begins to take on the magnitude of history. Portent begins to dwell in it.

And suddenly I apprehend in it the dark proposal of the ground. Under the fallen leaf my breastbone burns with imminent decay. Other leaves fall. My body begins its long shudder into humus. I feel my substance escape me, carried into the mold by beetles and worms. Days, winds, seasons pass over me as I sink under the leaves. For a time only sight is left me, a passive awareness of the sky overhead, birds crossing, the mazed interreaching of the treetops, the leaves falling—and then that, too, sinks away. It is acceptable to me, and I am at peace.

When I move to go, it is as though I rise up out of the world.

Wendell Berry, A Native Hill, written in 1962 when he was 28 years old

When Union and Confederate troops happened to camp across rivers from each other, it became a common practice for their bands to engage in musical exchanges. They would take turns playing their own favorites, eliciting cheers from both sides, and then the bands would play “Home Sweet Home” in unison. After one such interlude, a Confederate soldier wrote in his diary, “I do believe that had we not had the river between us that the two armies would have gone together and settled the war right there and then.”

In 1870, Julia Ward Howe wrote the “Mother’s Day Proclamation,” a call to action that asked mothers to unite in promoting world peace.

“From the bosom of the devastated earth a voice goes up with our own. It says: Disarm, disarm!”
—Julia Ward Howe

“We found these states in a very good condition. The mentioned Incans were governing them so wisely that among these people there were no thieves, neither vicious men nor unfaithful wives, no immoral people. Everyone had there honest and useful professions. They knew no crime or execution. Everyone owned their own property and not a single other person would claim it. What urges me to write about this now is my consciousness, I feel guilty. We’ve destroyed all this by our vicious and mean example. We’ve eliminated the nation that had such sovereigns and was so happy.”

Gaspar de Carvajal was a Dominican friar who accompanied a failed mission dispatched by Gonzalo Pizarro to the upper Amazon basin, and ended up wandering for years along the Amazon river before finally reaching the Atlantic and returning to Spain. He wrote about what he found in a travelog, Relación del nuevo descubrimiento del famoso río Grande que descubrió por muy gran ventura el capitán Francisco de Orellana (“Account of the recent discovery of the famous Grand river which was discovered by great good fortune by Captain Francisco de Orellana”)

Graham Hancock estimates that there were 20 million people in Carvajal’s Amazon, about ¼ the population of Europe at the time. [New Scientist article] A few years later, the entire region had been depopulated by smallpox, with only a few thousand people surviving.

Bartolome de las Casas wrote in 1542 of the Spanish genocide and plunder of the Amazon’s peaceful socieities.

Carvajal’s diary suggests that another way to relate to nature might have been developed and sustained for thousands of years. Records of how they lived so peacably were lost when Pizarro burned the Inca central library, and much of the oral tradition was wiped out by smallpox and genocide.

We think of the Europeans coming to America with vastly superior technology, but maybe they had only superior weapons. We, today, having developed the way of conquest to the brink of its tragic denouement, might benefit mightily from learning about another kind of human civilization.

They do not bear arms, and do not know them, for I showed them a sword,
they took it by the edge and cut themselves out of ignorance.…They would make fine servants.
— Columbus, writing to the Queen, describing people he found in the West Indies

…when he expanded his message to oppose US militarism.

The King of the March on Washington is encased in amber, his still-deferred dream reduced to a harmless platitude, its endless repetition a proof of virtue.

But the King who declared from the pulpit of Riverside Church on April 4th, 1967, that his beloved country had become “the greatest purveyor of violence on earth” cannot be resurrected for the cameras or deployed as a spokesman for American redemption.  For that King might wander off the stage into the street, might occupy Wall Street and the Pentagon, or insist on reminding us that “a nation that continues, year after year, to spend more money on military defense than on programs of social uplift is approaching spiritual death.”

When he publicly declared his opposition to the Vietnam War in April 1967, King earned few friends in the administration, the press, or even among the civil rights establishment. FBI surveillance and harassment was ordered intensified.   He was relentlessly attacked from all sides for straying out of his “area” in criticizing the foreign policies of a President who had been so strong a Negro ally.  But if King hadn’t made pellucid the undeniable connection between the “giant triplets” of “racism, extreme materialism, and militarism” in his speech at Riverside, he doubled down a few days later at a massive peace rally at United Nations Plaza.  “The promises of the Great Society have been shot down on the battlefields of Vietnam, making the poor—white and Negro–bear the heaviest burden.”

…Read the rest from John Kirby

The phrase was first used by Abraham Lincoln in his inaugural address, Jan 1861.

We are not enemies, but friends. We must not be enemies. Though passion may have strained it must not break our bonds of affection. The mystic chords of memory, stretching from every battlefield and patriot grave to every living heart and hearthstone all over this broad land, will yet swell the chorus of the Union, when again touched, as surely they will be, by the better angels of our nature. 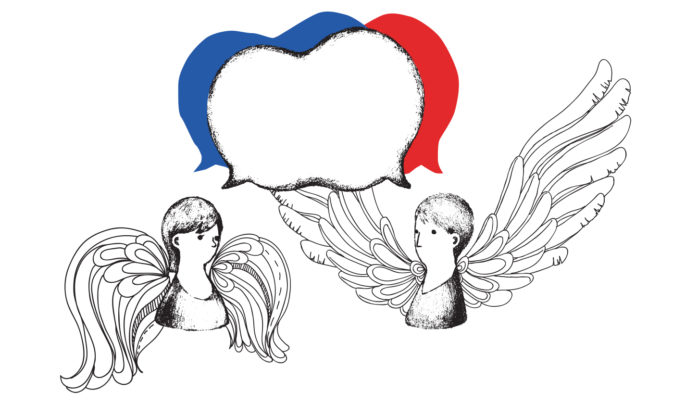 The Indian Men when young are Hunters and Warriors; when old, Counsellors; for all their Government is by Counsel of the Sages; there is no Force there are no Prisons, no Officers to compel Obedience, or inflict Punishment.—Hence they generally study Oratory; the best Speaker having the most Influence. The Indian Women till the Ground, dress the Food, nurse and bring up the Children, & preserve & hand down to Posterity the Memory of public Transactions. These Employments of Men and Women are accounted natural & honorable, Having few artificial Wants, they have abundance of Leisure for Improvement by Conversation. Our laborious Manner of Life compar’d with theirs, they esteem slavish & base; and the Learning on which we value ourselves, they regard as frivolous & useless.

Today we celebrate the War to End All Wars. It didn’t, and our take on the day has been misdirected by 101 years of propaganda glorifying war. Armistice Day has been turned into Veterans Day. The day to celebrate humanity’s long overdue renunciation of the brutal inhumanity of war has been turned into a day to celebrate the glory of people who gave their lives for their country. They didn’t, of course, give their lives for their country. They gave their lives to protect banking and business interests that profit from control of resources and profit from the conduct of war itself, profit exorbitantly by capitalizing on the chaos and deprivation of war, and the mentality of “spare no expense” that war encourages on both sides.

Last night, I read the Tao Te Ching with a group of friends. Lao Tzu tells us over again that good and evil are yin and yang, part of the way of the world, and that we needn’t take sides, certainly not try to impose the way of the Good on those we know to be Evil.

But he seems to make an exception for war. Over and over, he tells us that the Master never goes to war. He is more subtle than to say “War is evil”, because that would undermine the picture of evil counterposed to good that he has painted elsewhere. So he goes beyond good/evil to tell us in no uncertain terms, “Stay. Away. From. War.”

Today I am joining a March on the Pentagon.