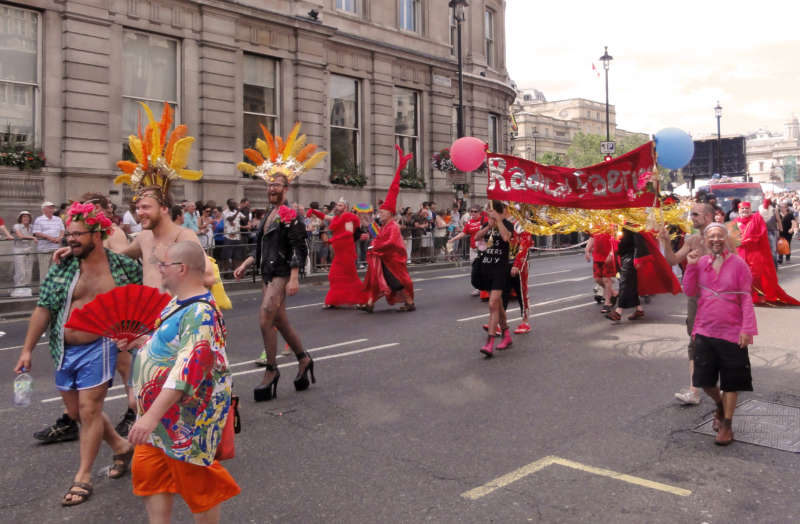 The Soviet Arts Council leaned heavily on Prokofiev to create music that was accessible to the proletariat. Fortunately, the Russian people have a sophisticated appreciation of music. And, as far as I can tell, this dicta hardly cramped Prokofiev’s style.

Сергей Прокофьев was born this day in 1891.

Thomas Szasz came to America from Hungary for medical training and residency as a psychiatrist, only to decide as a young doctor that he did not believe the medical model, or that “psychiatric illness” is a helpful concept. He set to work on a book, which evolved over the ensuing decade, and set in motion his mission as a reformer of psychiatric practice.

At root, he argued for respect of the patient. He argued against coercive treatment, against confinement, against drugs and electric shocks. He saw the psychiatrist as a listener, a friend, a helper, a guide. Empathy, not objective analysis, is at the heart of every relationship that relieves suffering and helps a huan individual to grow.

When the confining routines of normality waver or dissolve, when there’s an earthquake or a flood or some natural disaster that sweeps away the structures of society, it’s not what one might expect: dog eat dog, looting and chaos and the strong preying on the weak. Uh uh—It’s people getting together to take care of each other. It’s altruism rising to the fore. This natural community and solidarity emerges, and you realize that it’s been there all along, repressed by our systems and ideologies of separation, but it’s been waiting for an opportunity to come back. It’s showing us a future that’s available to us individually and collectively. It’s showing that health and happiness and even real wealth cannot exist in isolation but only in community. So we are at a choice point. We can double down on the science of control, stamping out the virus, surviving to meet the next crisis. Or we can say, ENOUGH! Enough of this separation. Now is the time to rejoin the community of life. That’s the crossroads where we find ourselves right now. 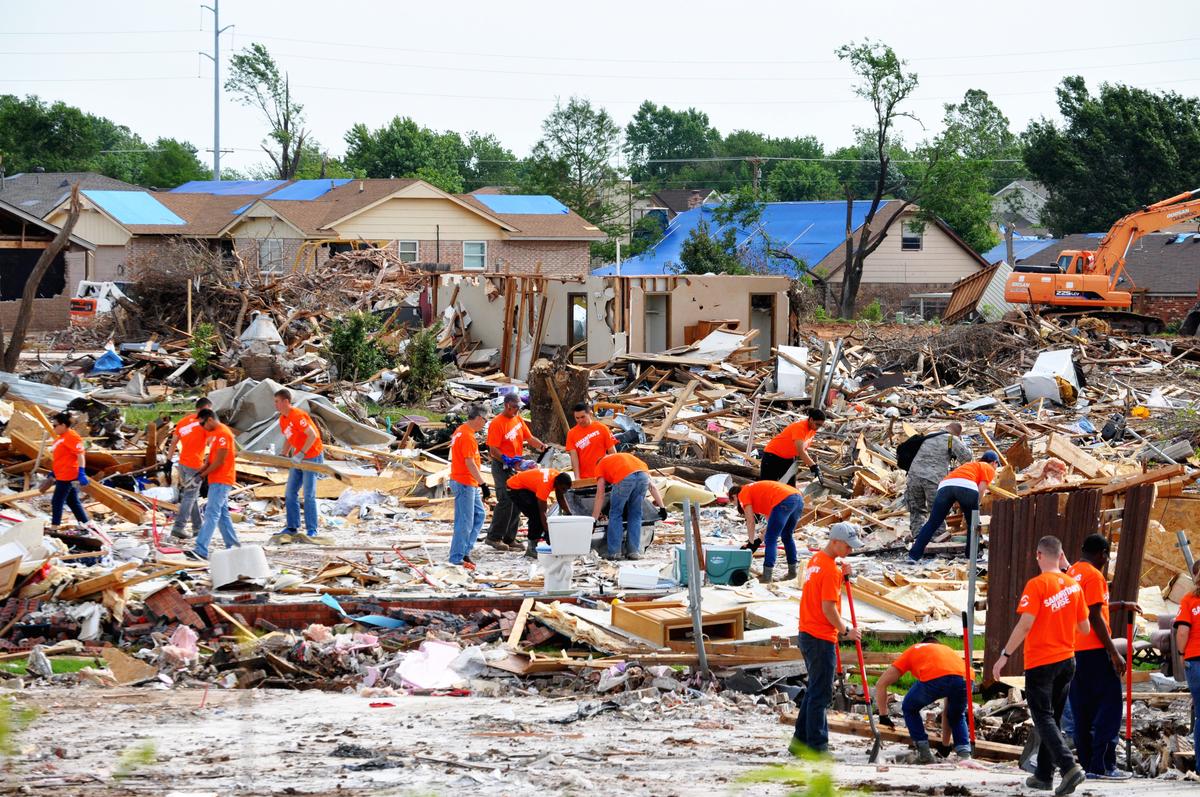 Science is a rich and fruitful source of helpful insights. It has its proper domain. But there are other domains, values and choices that science can’t properly evaluate. How do we make decisions that don’t ignore science, but give it just one seat in a larger circle? That’s a question I don’t have a ready answer for, but I do know that it is the right question to ask in these times. — CE

We innocently choose the side of “good”
Against outrageous evil we protest
It seems so clear, we side with what is best
And take the stand we manifestly should.

All morals are charade, a cosmic jest
That turns our pliant twigs to hardened wood.
Conflict and strife invade the neighborhood
As conscience turns each tribe against the rest.

And so when on life’s stage it comes to pass,
Sucked into strife by mutual disdain,
Good souls create a passionate morass
That culminates in grief, despair and pain.

If struggle is for you a source of pride,
Give thanks for those who take the other side.

So piteously the lonely soul of man
Shudders before this universal plan,
So grievous is the burden and the pain,
So heavy weighs the long, material chain
From cause to cause, too merciless for hate,
The nightmare march of unrelenting fate,
I think that he must die thereof unless
Ever and again across the dreariness
There came a sudden glimpse of spirit faces,
A fragrant breath to tell of flowery places
And wider oceans, breaking on the shore
From which the hearts of men are always sore.
It lies beyond endeavour; neither prayer
Nor fasting, nor much wisdom winneth there,
Seeing how many prophets and wise men
Have sought for it and still returned again
With hope undone. But only the strange power
Of unsought Beauty in some casual hour
Can build a bridge of light or sound or form
To lead you out of all this strife and storm;
When of some beauty we are grown a part
Till from its very glory’s midmost heart
Out leaps a sudden beam of larger light
Into our souls. All things are seen aright
Amid the blinding pillar of its gold,
Seven times more true than what for truth we hold
In vulgar hours. The miracle is done
And for one little moment we are one
With the eternal stream of loveliness
That flows so calm, aloft from all distress
Yet leaps and lives around us as a fire
Making us faint with overstrong desire
To sport and swim for ever in its deep—
Only a moment.
—————————O! but we shall keep
Our vision still. One moment was enough,
We know we are not made of mortal stuff.
And we can bear all trials that come after,
The hate of men and the fool’s loud bestial laughter
And Nature’s rule and cruelties unclean,
For we have seen the Glory we have seen.

Published under the pseudonym, Clive Hamilton, Spirits in Bondage (1919) was C. S. Lewis’s first book. Lewis was an undergraduate, then a soldier in the trenches. Some of the poems reflect the horrors and senseless suffering of of The Great War, some are lyrical paeans to natural beauty, and some foreshadow the thoughtful spirituality of the mature Lewis.

It is remarkable that mind enters into our awareness of nature on two separate levels. At the highest level, the level of human consciousness, our minds are somehow directly aware of the complicated flow of electrical and chemical patterns in our brains. At the lowest level, the level of single atoms and electrons, the mind of an observer is again involved in the description of events. Between lies the level of molecular biology, where mechanical models are adequate and mind appears to be irrelevant. But I, as a physicist, cannot help suspecting that there is a logical connection between the two ways in which mind appears in my universe. I cannot help thinking that our awareness of our own brains has something to do with the process which we call “observation” in atomic physics.

My favorite Dyson story is the one that got him started in his career. Twenty years after quantum mechanics, 40 years after relativity, no one had been able to combine the two in a coherent, unified framework. Then, in 1948, there was an embarrassment of riches. Julian Schwinger, a fireplug who spouted equations as if by direct channel from God, told us it was all about particles and sources. 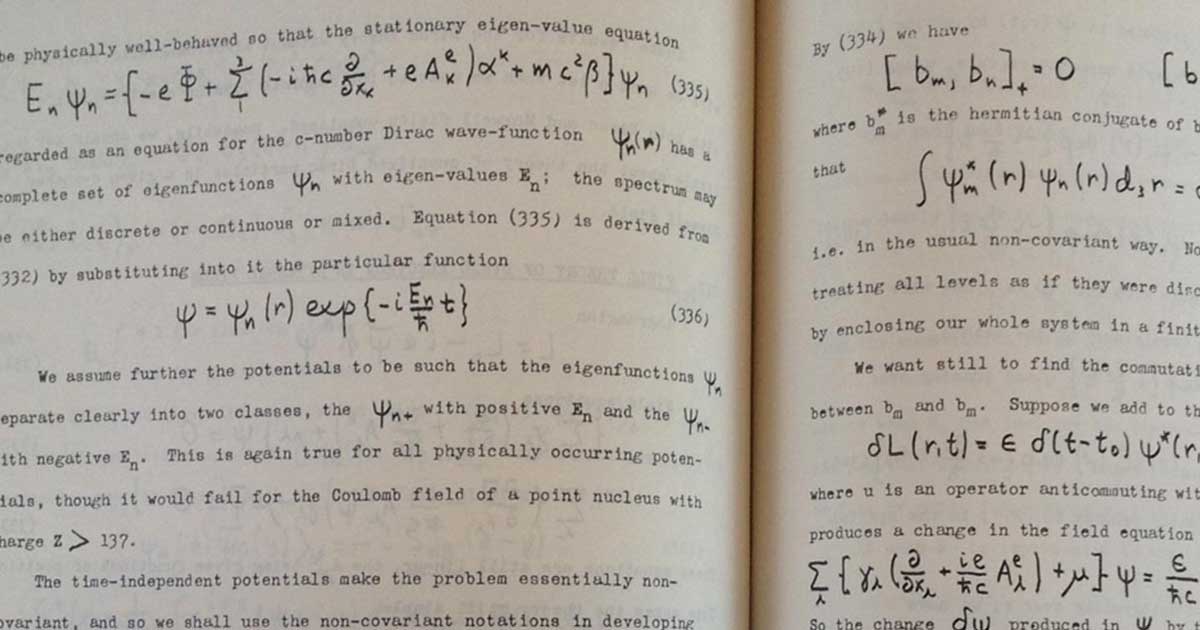 Richard Feynman, who played the bongo drums and made wisecracks, told us that while we’re not looking, the electron does every possible and impossible thing, and he gave us a cartoon system for keeping track of what all those things are.

Dyson was a 24-year-old grad student, and undeterred by their mutually antagonistic personalities, he befriended both of them, channeled both their thought processes, and published a paper in which he demonstrated that the two theories, though they looked so different on paper, always produced the same predictions.

After that, the rigid hierarchical system of academic physics carved a place for him, and allowed him to do whatever he wanted, so that he never again had to take a test or qualify for a degree. He hung out at Princeton’s Institute for Advanced Study, home to Einstein, Oppenheimer, von Neumann, and Gödel.

He was an original and independent thinker on all subjects. He thought about culture and politics and technology as well as the deep structure of science. He was still writing for the New York Review of Books in his 96th year.

Dyson had a gift for the memorable line and a disarming honesty that admitted the possibility of error. It was, he would say, better to be wrong than to be vague, and much more fun to be contradicted than to be ignored. Dyson was by instinct and reason a pacificist, but he understood the fascination with nuclear weaponry.
— Guardian Obit

“The more I examine the universe and the details of its architecture, the more evidence I find that the universe must in some sense have known we were coming,”