On this day in 621, the prophet Mohammed ascended to heaven, stopping in Jerusalem at the al-Asqa mosque along the way. 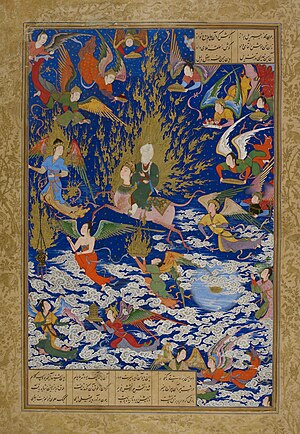 According to Hadith reports, Gabriel took the Prophet

at night from the Ka’bah to the mosque in Jerusalem on a buraq (magic horse). On reaching Jerusalem the Prophet

along with other Prophets offered Prayers. Gabriel then took him to the heavens and the Prophet

Finally, he reached the highest point in the heavens and was graced with an experience of the Divine Presence. On that occasion the Prophet

returned from the heavens to Jerusalem, and from there to the Holy Mosque in Makka. The following day, the unbelievers in Makka found the whole narration utterly amusing.  In fact, even the faith of some Muslims was shaken because of the highly extraordinary nature of the account.

Allah tells Muhammad that his people must pray 50 times a day, but as Muhammad descends back to Earth, he meets Moses who tells Muhammad to go back to God and ask for fewer prayers because 50 is too many. Muhammad goes between Moses and God nine times, until the prayers are reduced to the five daily prayers, which God will reward tenfold. Again, Moses told Muhammad to ask for even fewer but Muhammad felt ashamed and said that even with fewer prayer times, his followers might not even perform diligently and said he is thankful for the five. —Wikipedia

For years my heart inquired of me
Where Jamshid’s sacred cup might be,
And what was in its own possession
It asked from strangers, constantly;
Begging the pearl that’s slipped its shell
From lost souls wandering by the sea.
Last night I took my troubles to
The Magian sage whose keen eyes see
A hundred answers in the wine
Whose cup he, laughing, showed to me.
I questioned him, “When was this cup
That shows the world’s reality
Handed to you?” He said, “The day
Heaven’s vault of lapis lazuli
Was raised, and marvelous things took place
By Intellect’s divine decree,
And Moses’s miracles were made
And Sameri’s apostasy.”
He added then, “That friend they hanged
High on the looming gallows tree—
His sin was that he spoke of things
Which should be pondered secretly,
The page of truth his heart enclosed
Was annotated publicly.
But if the Holy Ghost once more
Should lend his aid to us we’d see
Others perform what Jesus did—
Since in his heartsick anguish he
Was unaware that God was there
And called His name out ceaselessly.”
I asked him next, “And beauties’ curls
That tumble down so sinuously,
What is their meaning? Whence do they come?”
“Hafiz,” the sage replied to me,
“It’s your distracted, lovelorn heart
That asks these questions constantly.”