Today is the bicentenniel of my all-time favorite author. Her mastery of the language rewards my close attention to her choice of words, so the more I read into her work, the more I learn.

Not only does she understand human nature deeply, she writes with compassion, even when her characters do bad things, even when she is poking fun, she invites us to open our heart to the characters she has created.

She writes about religion and politics from a wise, humanistic perspective, profile the best parts of Christianity and Socialism, for example, while painting for us the the dogmas and hypocrisies of each. In this passage from her last, quirky novel, she manages to spoof futurology, while displaying a striking prescience about where our species was headed in the century plus after she wrote this (1879).

Eliot is keenly aware of the Darwinian thought and of the impending land-grab by a scientific (mechanistic) world-view that threatens to take over the moral and aesthetic realms. She is talking here about (and laughing at) the prospect of an artificial intelligence taking over and disposing of its creator.

“Nothing of the sort!” returned Trost, getting angry, and judging it kind to treat me with some severity; “what you have heard me say is, that our race will and must act as a nervous centre to the utmost development of mechanical processes: the subtly refined powers of machines will react in producing more subtly refined thinking processes which will occupy the minds set free from grosser labour. Say, for example, that all the scavengers work of London were done, so far as human attention is concerned, by the occasional pressure of a brass button (as in the ringing of an electric bell), you will then have a multitude of brains set free for the exquisite enjoyment of dealing with the exact sequences and high speculations supplied and prompted by the delicate machines which yield a response to the fixed stars, and give readings of the spiral vortices fundamentally concerned in the production of epic poems or great judicial harangues. So far from mankind being thrown out of work according to your notion,” concluded Trost, with a peculiar nasal note of scorn, “if it were not for your incurable dilettanteism in science as in all other things—if you had once understood the action of any delicate machine—you would perceive that the sequences it carries throughout the realm of phenomena would require many generations, perhaps aeons, of understandings considerably stronger than yours, to exhaust the store of work it lays open.”

“Naturally,” I persisted, “it is less easy to you than to me to imagine our race transcended and superseded, since the more energy a being is possessed of, the harder it must be for him to conceive his own death. But I, from the vantage of a common fish, can easily imagine myself and my congeners dispensed within the frame of things and giving way not only to a superior but a vastly different kind of Entity. What I would ask you is, to show me why, since each new invention casts a new light along the pathway of discovery, and each new combination or structure brings into play more conditions than its inventor foresaw, there should not at length be a machine of such high mechanical and chemical powers that it would find and assimilate the material to supply its own stock, and then by a further evolution of internal molecular movements reproduce itself by some process of fission or budding. This last stage having been reached, either by man’s contrivance or as an unforeseen result, one sees that the process of natural selection must drive men altogether out of the field; for they will long before have begun to sink into the miserable condition of those unhappy characters in fable who, having demons or djinns at their beck, and being obliged to supply them with work, found too much of everything done in too short a time. What demons so potent as molecular movements, none the less tremendously potent for not carrying the futile cargo of a consciousness screeching irrelevantly, like a fowl tied head downmost to the saddle of a swift horseman? Under such uncomfortable circumstances our race will have diminished with the diminishing call on their energies, and by the time that the self-repairing and reproducing machines arise, all but a few of the rare inventors, calculators, and speculators will have become pale, pulpy, and cretinous from fatty or other degeneration, and behold around them a scanty hydrocephalous offspring. As to the breed of the ingenious and intellectual, their nervous systems will at last have been overwrought in following the molecular revelations of the immensely more powerful unconscious race, and they will naturally, as the less energetic combinations of movement, subside like the flame of a candle in the sunlight Thus the feebler race, whose corporeal adjustments happened to be accompanied with a maniacal consciousness which imagined itself moving its mover, will have vanished, as all less adapted existences do before the fittest—i.e., the existence composed of the most persistent groups of movements and the most capable of incorporating new groups in harmonious relation. Who—if our consciousness is, as I have been given to understand, a mere stumbling of our organisms on their way to unconscious perfection—who shall say that those fittest existences will not be found along the track of what we call inorganic combinations, which will carry on the most elaborate processes as mutely and painlessly as we are now told that the minerals are metamorphosing themselves continually in the dark laboratory of the earth’s crust? Thus this planet may be filled with beings who will be blind and deaf as the inmost rock, yet will execute changes as delicate and complicated as those of human language and all the intricate web of what we call its effects, without sensitive impression, without sensitive impulse: there may be, let us say, mute orations, mute rhapsodies, mute discussions, and no consciousness there even to enjoy the silence.”

The following metaphysical poem was discovered in her notebooks in the 1960s, after it didn’t make the cut in  College Breakfast Party, a multi-party philosophical/religious discussion in the form of a long poem. 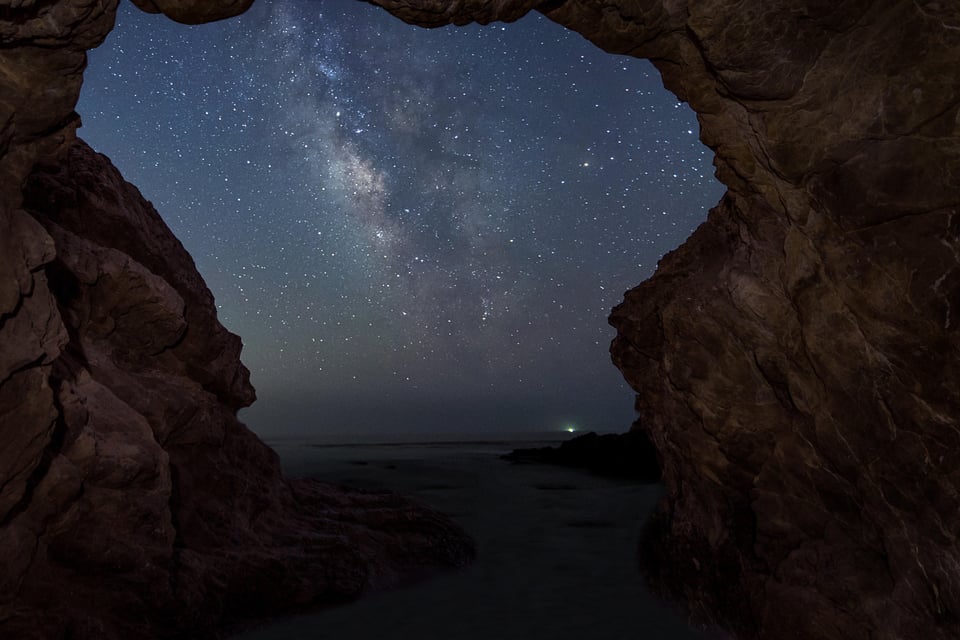 A cave in Malibu CA, photo by Marcel on Reddit https://www.reddit.com/user/-Marcel-/

………………I grant you ample leave
To use the hoary formula ‘I am’,
Naming the emptiness where thought is not;
But fill the void with definition, ‘I’
Will be no more a datum than the words
You link false inference with, the ‘Since’ & ‘so’
That, true or not, make up the atom-whirl.
Resolve your ‘Ego’, it is all one web
With vibrant ether clotted into worlds:
Your subject, self, or self-assertive ‘I’
Turns nought but object, melts to molecules,
Is stripped from naked Being with the rest
Of those rag-garments named the Universe.
Or if, in strife to keep your ‘Ego’ strong
You make it weaver of the etherial light,
Space, motion, solids & the dream of Time —
Why, still ’tis Being looking from the dark,
The core, the centre of your consciousness,
That notes your bubble-world: sense, pleasure, pain,
What are they but a shifting otherness,
Phantasmal flux of moments? —