I spent a week in Tibet last month.  I spent a day touring Buddhist monasteries, two days in Lhasa, and four days trekking in the mountains.

It was hard for me to relate to the Tibetan brand of Buddhism.  It seemed to be all about burning vats of yak butter and leaving dollar bills at the feet of fierce protector-gods that would save the supplicant from bad luck.  I saw little of mindfulness practice or vegetarianism or temperance or any of the familiar appurtenances of American Buddhism. 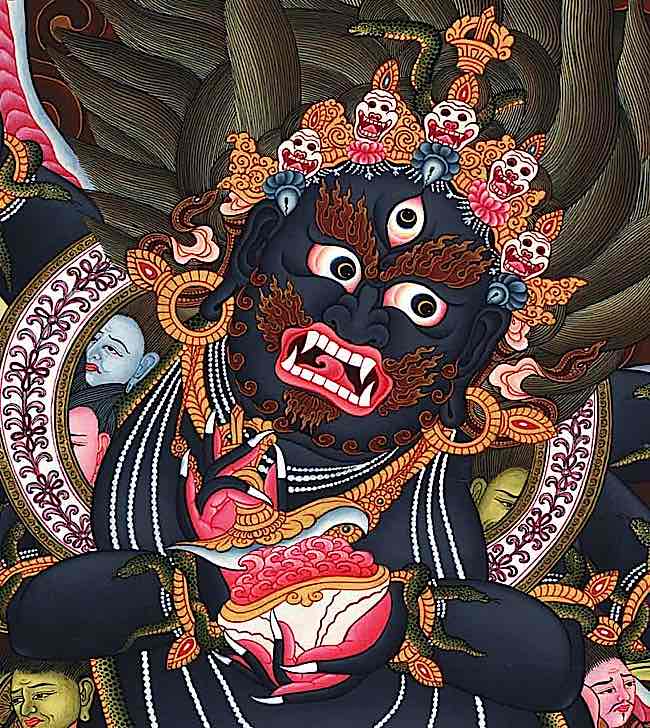 The lived experience of trekking was, for me, all about oxygen.  At 17,000 feet there’s just half as much of it as there is at sea level.  I never got nausea or headache symptoms, but whenever we were walking up even a mild incline, I was out of breath.  I did fast yogic breathing (kapalabhati) continuously for hours on end, just to avoid lightheadedness and disorientation.

Four days of this cleared my brain, and I came away with a sense of what is most important to me.  I had been thinking about Psi experiments in which focused attention has the power to change quantum events, change minds, heal bodies, and even alter broad social patterns.  The limited evidence that we have suggests that many minds focusing on the same intention have an outsized power—much greater than the sum of what might be accomplished by the sum of individual efforts.

This reminded me of a lifelong goal of integrating mind into the science of physics.  There is a minority of well-respected physicists who see quantum mechanics in this light.  [e.g. Henry Stapp, David Bohm.]

I was also reminded of the bumper sticker from the ’70s which I have quoted in the title of this post.  I came from Tibet with a core vision for a project that we might create together.

I want to ask you to help me organize a sustained and synchronized world-wide, cross-cultural meditation for peace.  Within the political peace community, it will be publicized as a commitment to the inner work we need to do in order to be effective activists. Within the Buddhist community, it will be committing our meditation practice to an act of service. Within communities of experimental parapsychology, it will be a study about reinforcement of psychic effects with the power of numbers.  Across Jewish and Christian and Muslim communities, it will be promoted by the clergy as coordinated prayer for peace in a time of world crisis. People choose prayer or meditation or focused intention as fits their culture and beliefs, but there is enough common ground in our work to be the basis of a worldwide mental resonance.

I imagine a series of goals, progressively ambitious, each one specific enough that we can clearly say when the goal is achieved. I propose as our first goal: An end to violence between Israelis and Palestinians, with full citizenship rights and freedoms for Jewish and Islamic peoples. The recent Israeli massacres in Gaza have stirred my conscience, and as a Jew, I feel a special call to say, “I do not condone the actions of Mossad and the Israeli military.”

This is not a substitute for collective action or BDS or political protest.  When we do succeed in creating peace, these will be the outward vehicles by which it is accomplished.  Those who do not believe in miracles will have their own story about how it came about.